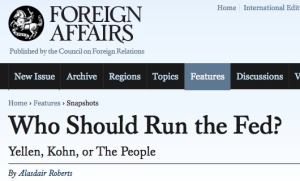 Foreign Affairs has just published my article, Who should run the Fed?  “The fight over who will succeed Ben Bernanke as chair of the U.S. Federal Reserve rolls on, getting bigger and more tangled as it goes. It is easy to get caught up in the debate about the merits of different candidates, but doing so misses a larger point. The real story here is the intensity of the fight itself, which is evidence of a shift of power toward central bankers that began under U.S. President Ronald Reagan and has been aggravated since the financial crisis of 2008.”

From: The Logic of Discipline
← Ventriss discusses AFGD in ARPA
Details on new book, “The End of Protest” →