“A provocative read built on fascinating historical and contemporary evidence that any history or political science student will enjoy.” Trent Engbers, University of Southern Indiana

“A bold and intriguing argument … Roberts explores the big themes that are destined to shape debates about the future of governance.” Donald F Kettl, University of Maryland

Description from the Press: “With the fields of public administration and public management suffering a crisis of relevance, Alasdair Roberts offers a provocative assessment of their shortfalls. The two fields, he finds, no longer address urgent questions of governance in a turbulent and dangerous world. Strategies for Governing offers a new path forward for research, teaching, and practice. Leaders of states, Roberts says, are constantly reinventing strategies for governing.  Experts in public administration must give advice on the design as well as execution of strategies that effective, robust and principled. Strategies for Governing challenges us to reinvigorate public administration and public management, preparing the fields for the challenges of the twenty-first century.”

“This brief, clearly written book is a must read for academics and an essential addition to the required reading for public administration graduate students.” — Journal of Military and Political Sociology, February 2022.

“This is a thought-provoking book, one that deserves the attention of everyone in the field of public administration.”– Teaching Public Administration, April 2021.

“The argument’s timeliness is uncanny . . . Roberts’ book is a real bottomless well of research ideas ready to be pursued by scholars, especially junior ones. The book would also be useful for directors of graduate programs in PA interested in equipping students with the mindset and tools to address the big picture.” Political Science Quarterly, June 2021.

“[Roberts] has nudged us in the right direction to reawaken why public administration . . .  is a field uniquely situated to link theory and practice at a macro-societal level . . . On that point alone, we all owe Roberts a great intellectual debt.” — Journal of Public Administration Research and Theory, October 2020.

“Roberts succinctly makes a timely case in favor of large concerns about governing . . . While dealing with currently urgent realities of the field, the analysis makes a contribution to last.” —  American Review of Public Administration, June 2020.

“Roberts is masterful at distilling complex concepts into a digestible format, through which both new students and senior scholars can engage and argue.  The book provides an opportunity to have a critical conversation about the boundaries of Public Administration.” — Governance, July 2020.

“Strategies for Governing has broad implications for research, teaching, and practice in a variety of disciplines and subfields. The book’s insights provide readers with fresh perspectives on important research questions in public administration, public policy, American politics, international relations, and comparative politics. Perhaps most notably, Roberts encourages us to return to first principles and to address the ‘what’ and ‘how’ of government.” — Perspectives on Politics, August 2020.

“Alasdair Roberts’ pithy, accessible, and refreshingly non-partisan book offers a pragmatic yet optimistic view of the benefits and future of government.  While thoughtfully acknowledging a broad range of complaints about the representativeness and effectiveness of Western democracies, Roberts persuasively counters by pointing out the undeniable progress and accomplishments of these governments.  His broad thesis–that democratic institutions work because they adapt to changing circumstances, often in unexpected ways–should provide both hope and inspiration to students and readers who despair about our current situation.” — Dean Sherry Glied, Wagner School of Public Service, New York University.

“This contrarian work is a welcome corrective to the doom and gloom commentary that is so common today.  Not only that, it’s a good read as well.  It will get an intensive workout in college seminars.” — Morris P. Fiorina, Stanford University

“Governing, particularly in democracies, is difficult and often frustrating work. In this vital new book, Alasdair Roberts explains why by identifying the multiple constraints imposed on political leaders. More importantly, he makes a convincing case that, over time, Western governments have successfully adapted to these constraints and have been largely effective at addressing the challenges they face. At a time when so many citizens are disenchanted with their governments, the argument in this book deserves a wide audience.” — Stephen K. Medvic, Franklin & Marshall College

“In a world dominated by narratives of democratic crisis and decline Alasdair Roberts reveals the innate complexities of modern governance and political statecraft. In a book that is as clear and accessible as it is intellectually thoughtful and provocative, Roberts offers a positive and optimistic account of contemporary politics. It offers an energizing breadth of fresh air in what is otherwise a fairly gloomy scholarly space.” — Matthew Flinders, University of Sheffield.

“Roberts’ thoughtful and elegant defense of democracy is to be welcomed . . . it is a refreshingly accessible read and a much-needed reminder both to social scientists and citizens in general about the importance of paying attention to history and what it can teach us about democracy.”  Public Administration Review, May/June 2017.

“To merely say this book is prescient would be doing a disservice to the text; its relevance and accuracy in describing our national climate is almost unnerving. . . . This is a book for citizens who care about democracy and find beauty and excitement in the fragility of this ‘great experiment.'”  Public Integrity, April 2017.

“Roberts’ overview of American democracy and how it has adapted and changed over the years is both very enjoyable and thought-provoking. . . . Roberts’ book is a reminder of the enduring (though not unassailable) stability of democracy, and the more basic issues always surrounding it.” The Complete Review, February 2017.

“This is a brilliant book and a much-needed antidote to ‘the politics of pessimism’ that swirls around so much scholarly writing and media messaging.”  LSE Politics & Policy Blog, May 2017. 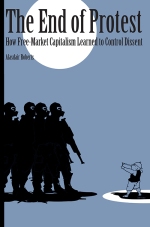 “If you care about your rapidly disappearing right to peacefully protest in the U.S. and the U.K., read this book.”  — CriticalMargins.com

“Roberts convincingly argues that in the last three decades, the two countries that led the free-market revolution–the US and Britain–have invented new strategies for dealing with unrest over free market policies.” — Economic Sociology and Political Economy.

“America’s First Great Depression is an intriguing history of American financial policy in the 1830s and 1840s. Alasdair Roberts’s contention that international financial considerations shaped U.S. policymaking is well sustained, the writing is sprightly, and the argument is nicely documented with a wealth of judiciously culled evidence.”  — Richard John, Columbia University.

“Alasdair Roberts tells a wide-ranging story of the depression that  began in 1837 with lucidity, emphasizing the role of global financial markets and finding plenty of analogies to the economic problems of today.”— Daniel Walker Howe, Pulitzer-Prize-winning author of What Hath God Wrought: The Transformation of America, 1815–1848

The Logic of Discipline: Global Capitalism and the Architecture of Government (New York: Oxford University Press, 2010)

“A tour de force which deserves to be read and debated.  It has a grand synthetic sweep which is rare enough in scholarship these days, and it makes an important, imaginative contribution to our efforts to understand the forces shaping public policy in the last three decades.”  Public Administration, December 2012.

“This concise and provocative book has a readability that belies its dense subject matter. . . . [A] revealing exploration of the democratic deficit that lingers at the core of many of our society’s major institutions.” Times Literary Supplement, November 26, 2010.

“Recommended.  Roberts’ sound judgment and expertise in the field of public administration make this an excellent primer on governance in the Bush years.”  Choice, September 2008.

“A trenchant analysis of the last eight years of American political history. . . . A work of rare insight that fills gaps glaringly evident in most public discourse.” Kirkus Reviews, November 1, 2007.